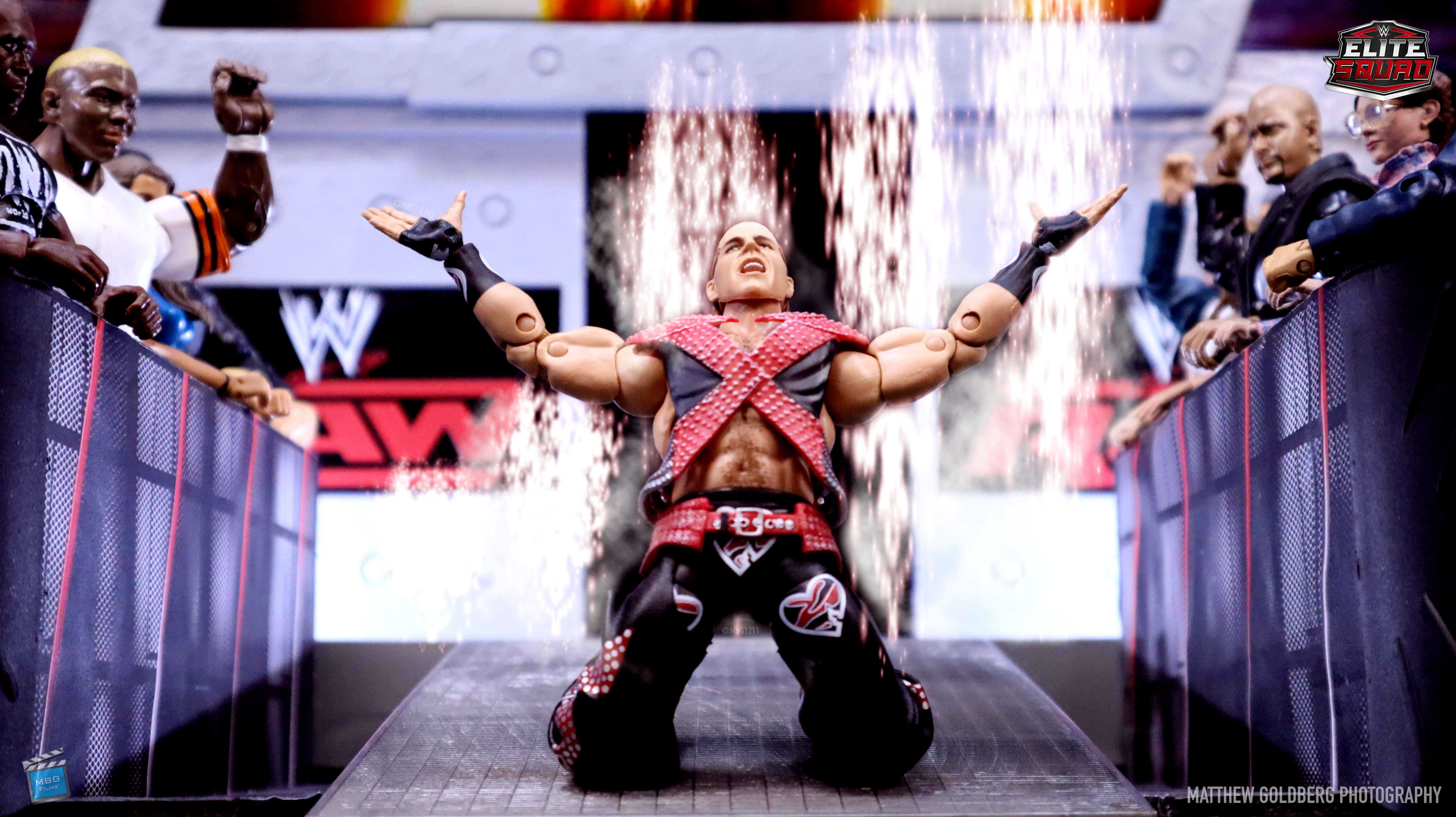 What made you want to become a photographer?

Being a toy stop-motion animator since I was 16, I’m 29 as of this interview, I always had to use photography to create my videos. However, I never looked at it like “photography” rather “videography” if that makes sense. Over the past five years or so I started exploring just photography once I settled down with animation as I still wanted to explore my passion for professional wrestling and toys in a new artistic way. It’s much less time consuming than animation and just as rewarding and fulfilling for me as an artist. Over the years my artistic eye has evolved tremendously and I believe it shows through my work over the years. Once I started sharing my photography with the wrestling toy community it made me realize I was onto something, so I’ve continued to pursue it.

Why do you enjoy using Lume Cubes? Which piece of gear is your favorite?

Lume Cubes are honestly one of my favorite photography “toys” as they just make life so much easier in terms of the craft. Lighting is so crucial to photography and it’s not easy to master either in my opinion, but Lume Cube gives you so much control over your lighting in the palm of your hand. From all the accessories to filters to diffusers and so on. It’s just amazing how powerful they truly are for such a small light. I honestly wish I had them years ago when starting out.

I’d say my favorite piece of gear is the Lume Cube 2.0 as I love how much easier it is to control the brightness. Not that it was difficult on the 1.0, but having a + and - button just makes it easier. Plus the fact you can add on all the filters and what not is a game changer.

Who are you inspired by?

I’m honestly inspired many times by my peers in the community and wrestling in general. There are so many talented people in the community who bring their own style to the table. Not to mention when I need some inspiration I’ll watch some wrestling as sometimes I will see something that immediately sparks some motivation for me to “run to the table” as I like to say and take some photos. The people who support my work also inspire me to continue as their feedback really motivates me to keep going and trying new things. Knowing my work has touched someone’s life is so fulfilling and motivating to me, which is probably why I’m still doing this kind of stuff for over 13 years. If people didn’t enjoy my work I probably wouldn’t enjoy it as much either honestly.

If you weren’t a photographer, what would you be instead?

I’d most likely be a filmmaker. I went to school for film and television, receiving a Bachelor of Arts and Master of Fine Arts in film and television. I was a little burnt out on it by the time I finished so I pursued video and photography content that I could create on my own at a much quicker rate and it’s paid off big time thankfully.

If I didn’t work with cameras at all I’d probably work in the social media field as I love creating content. Creating in general just gets me going so anywhere I can be openly creative would make me happy.

If you could only shoot with ONE lens-type for the rest of your life, which would it be? Fisheye, wide-angle, prime, zoom, macro, or a telephoto lens?

Probably a wide-angle lens as the more “funky” lenses don’t interest me as much, at least for what I use my camera for. They do serve their purpose no doubt, but not something I turn to as often with my work.

What is your go-to camera?

I just recently upgraded my camera from a Sony A33 to a Canon EOS M50. It’s a big learning curve for me as it’s about 8-10 years of new technology since my last camera, but it’s been great so far. I love having more control over my images in-hand than in post. 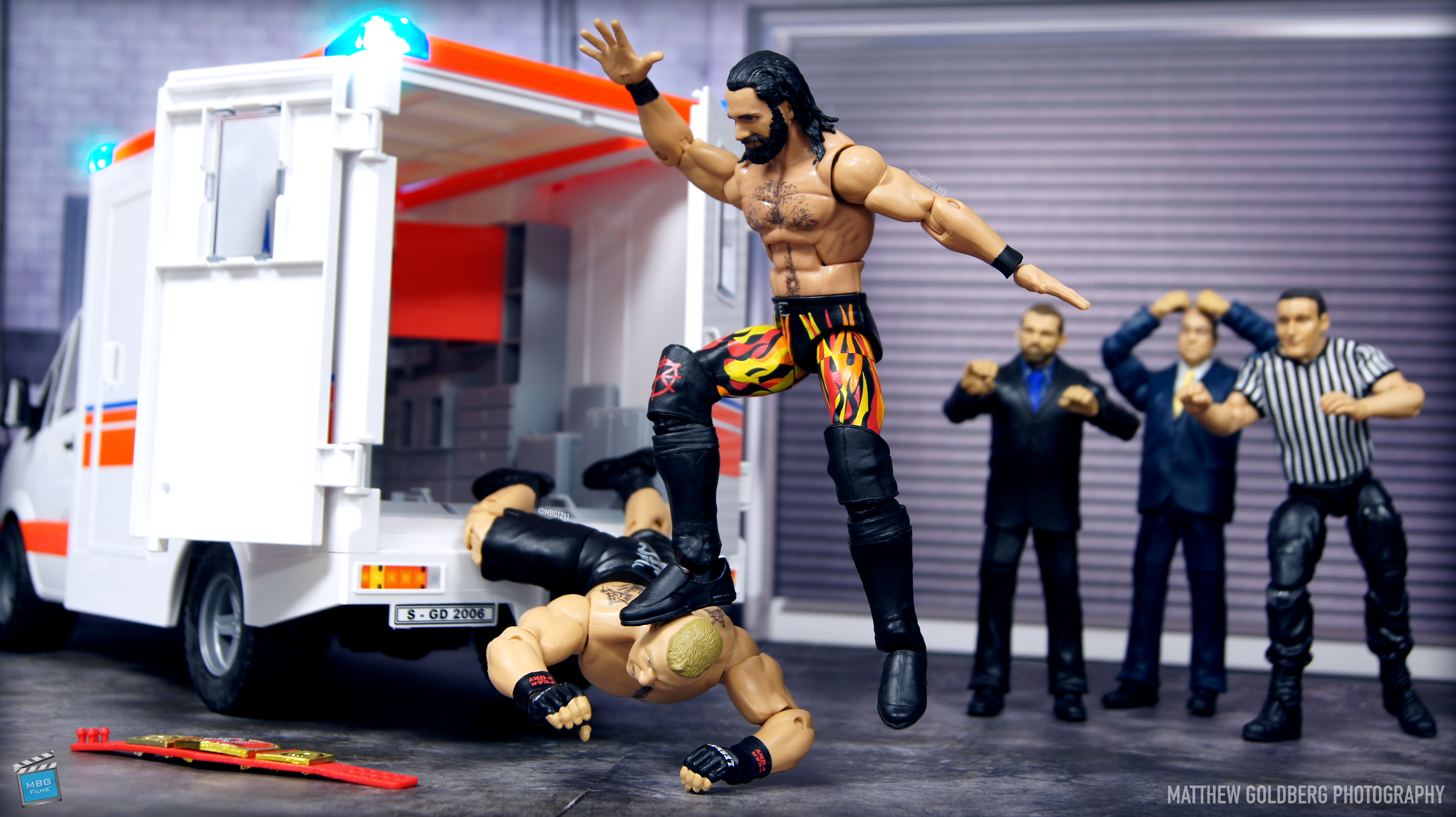 Any advice for new photographers that are trying to follow in your footsteps?

My biggest advice for new photographers is to purchase a tripod to keep the camera still and honestly invest in some Lume Cubes for affordable and portable lighting. I do have a web series on WrestleZone.com called Figure 2 Photo where people can see how I create my photos. If that can help guide newbies on things to try/pursue then it’s served its purpose. But I am always an open book and am willing to help people learn as I truly enjoy giving back to the community that has supported me all these years. A lot of people have adapted a contraption I made at a young age into their toy photography to make things easier, which is truly humbling to say the least.

How do you keep your photos fresh and new?

I like to push myself and try new things, especially things others haven’t done or have barely done. There’s a lot of people that just reproduce the same type of work and it all looks the same after awhile. Each year I decide there is something new I want to pursue and I will go after it as best as I can. This year I’m trying more visual effects in my work and the response has been tremendous so far. Pushing the envelope is so vital to growing as an artist and if you keep spinning your wheels you don’t move forward, so pushing myself to go above and beyond has been very rewarding.

What is your preferred editing software?

What is the best part of your day?

My favorite part of the day is coming home from a long day of work, spending some time with my wife, then heading down to the table to work on either photographing some figures or reviewing some for clients. I’m a workhorse, but it all pays off in the end.

I do like both, but iced tea is my go-to drink. At work on production trips my nickname is actually “Sweet T” because that’s all I drink besides water when out in the field.

What’s your favorite photo you’ve taken and why?

My favorite photo as of late is probably the WWE entrance of “The Fiend” Bray Wyatt. So many artists worked together to make that figure for me and I feel I really captured the look and feel of his eerie entrance thanks to my Lume Cube lights. The response on that photo was fantastic, reassuring me I captured it well. 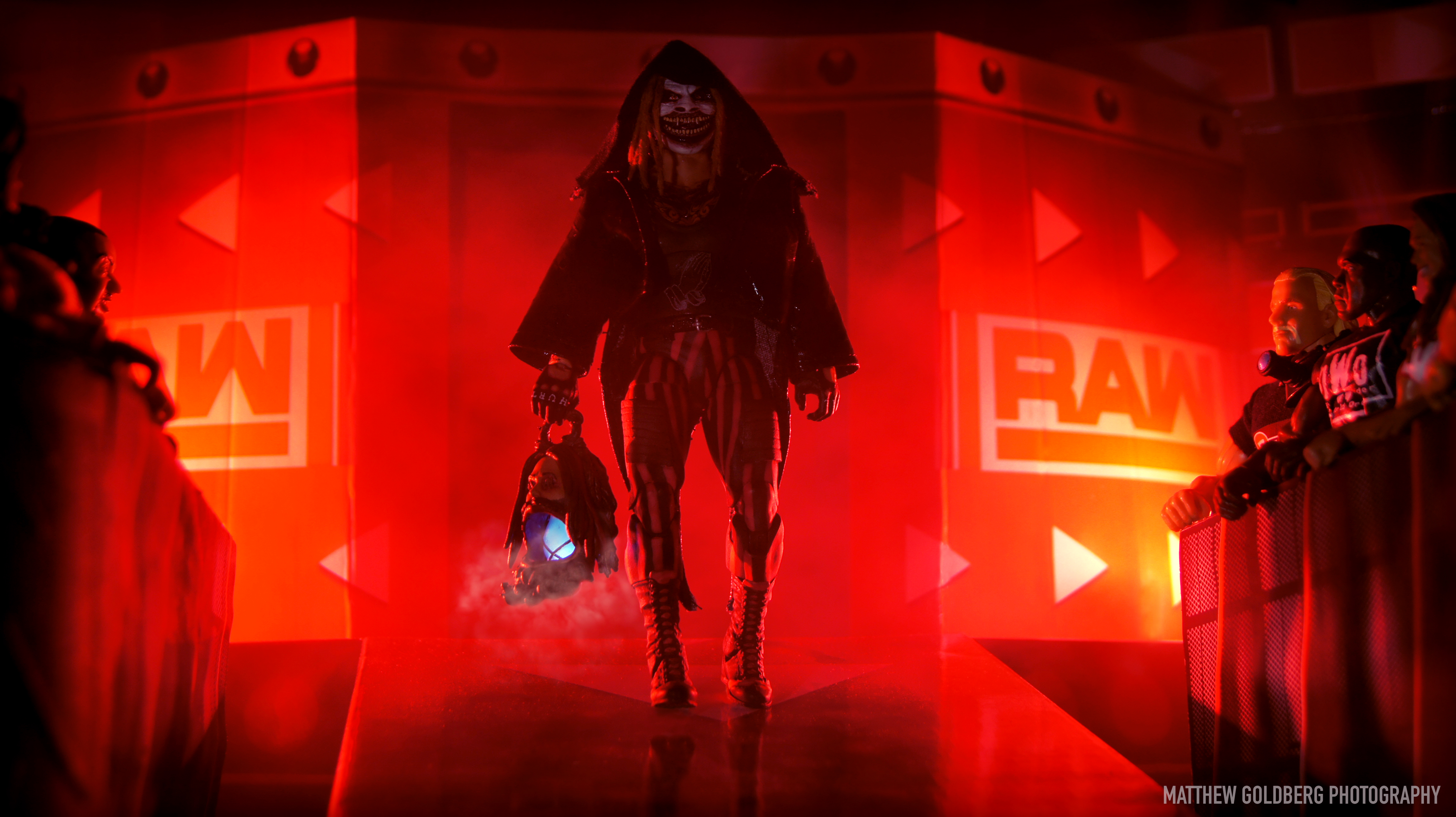 You have had the chance to photograph some amazing wrestling toys! Is there anyone in the wrestling community that you would love to meet that you have photographed?

I’ve been very fortunate over the years to work with a lot of my childhood heroes thanks to this hobby, such as Hulk Hogan. The one wrestler I’ve yet to meet and is a childhood favorite of mine is Bill Goldberg. Sadly we are not related, but I have captured him in some photos and that, too, is probably another favorite of mine. I hope to meet him one day as my father has been to his house before, so hopefully it will be in the cards that we will officially cross paths one day.

What companies have you produced work for? How did that come about?

Since I was 16 I’ve worked with many toy and entertainment companies, mostly revolving around the WWE license. Companies such as: WWE, TNA Wrestling, WrestleZone, Jakks Pacific, Mattel, Ringside Collectibles, Loot Crate, Forever Collectibles, Wicked Cool Toys, Jazwares, Slim Jim, Eaglemoss/Hero Collector and probably others I can’t think of. It’s been an amazing journey and I’m very thankful for all of it.

When I was 17 Hulk Hogan’s buddy, Eric Bischoff, who is a TV producer and was an on-air personality in WWE and WCW and other promotions, discovered my wrestling animations on YouTube and wanted to work with me but I was just a teen. He and I formed a friendship and when I went to college he helped me get an opportunity at TNA Wrestling where I worked alongside Hulk Hogan and many other childhood heroes. It was a dream opportunity for me to be in the presence of so many people I grew up watching/admiring on television. I wound up making friends with several as well as made some documentaries with a few that went on to the Cannes Film Festival and other festivals around the world. Once I graduated college I did some animation work for WWE and later was approached by Mattel and other licensees to help promote their products.

To this day I still work with a lot of companies as clients on the side to promote their WWE products to my ever-growing audience. It’s been a crazy, yet very fulfilling journey for me so far and there’s more on the way. I’m beyond thankful for the support from others, to say the least as without them I’m not sure many eyeballs would be seeing my work, to begin with.

Have you ever thought of doing other toy photography besides wrestling?

I’ve contemplated doing cinematic photography of my favorite films or shows, but haven’t quite taken the jump yet. It’s been a thought on my mind for a good year or two now, but taking the jump is always the hardest part. Not to mention my audience is so used to wrestling I always wonder if it will be as well received. Based on my track record it probably would do just fine but as an artist, you’re never truly satisfied, unfortunately. 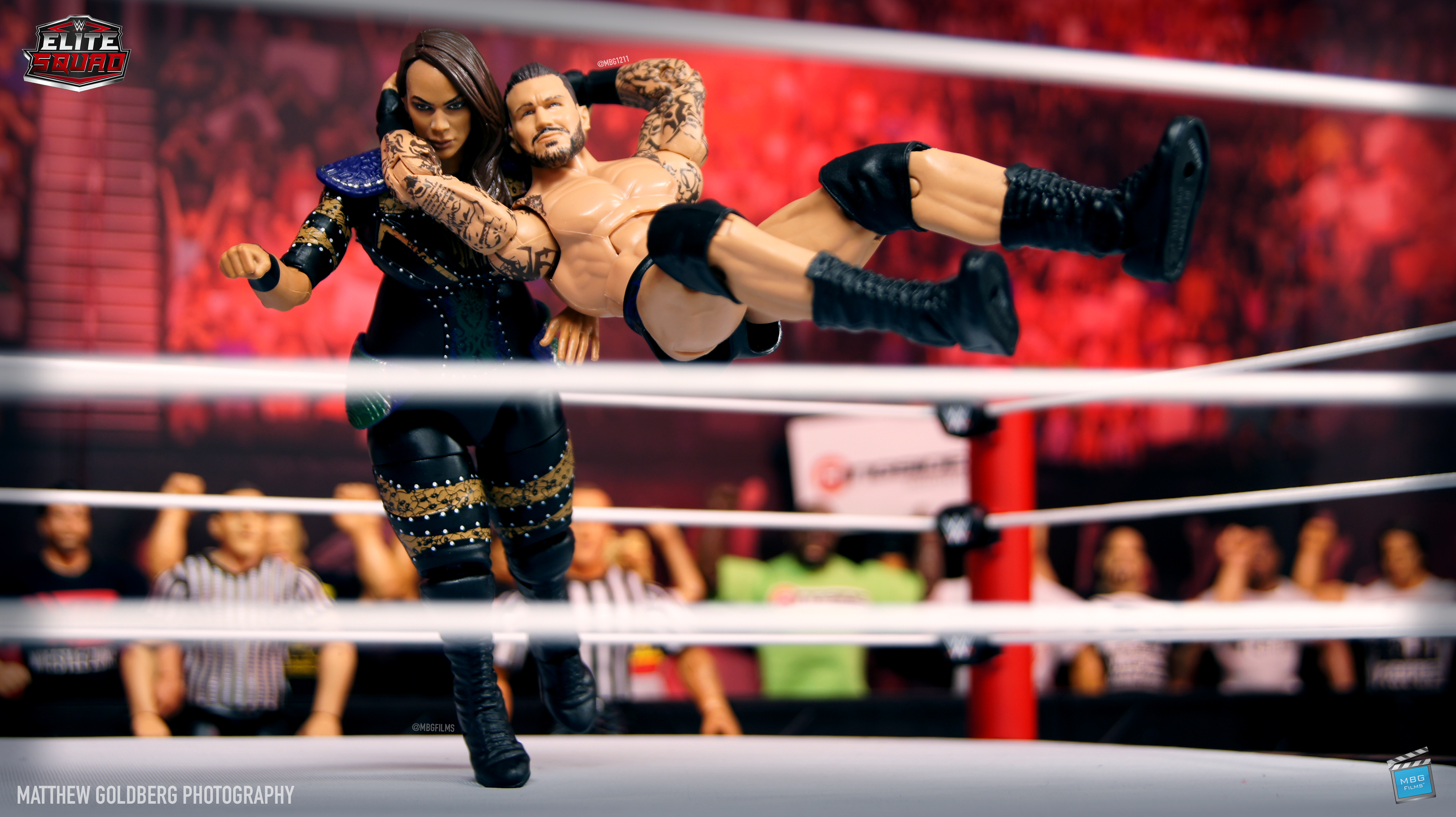 Is anyone in your family a photographer?

My wife is the only person I know in my family who loves taking photos. She has a great eye for nature and environmental photography. It’s wonderful to share that with her although I like to photograph toys more than nature. I guess you can say we balance each other in that regard.

After going to film school for many years I love that toys don’t challenge or talk back to you, haha. In all seriousness, I like being able to truly manipulate the whole scene as with toys you can literally control everything. You have to build the set, light it, pose the “actors” and add any props, etc. to complete it. Combining my passion for collecting with visual storytelling was like a match made in heaven for myself as an artist.

What types of toys do you prefer to use for your photography?

I like to use heavily articulated action figures as you can truly capture the emotion and feel of the scene with toys that can be posed as realistically as possible. My goal is always to make people take a double-take of what they’re looking at. The more articulation the better in my opinion.

Describe your photography style in 5 words.

If you could have lunch with one person (dead or alive) who would it be? Why?

If we’re talking about anyone in the world, it would be my grandfather, Robert, who passed away when I was just an infant. I’d love to hear what he has to say/thinks of my journey.