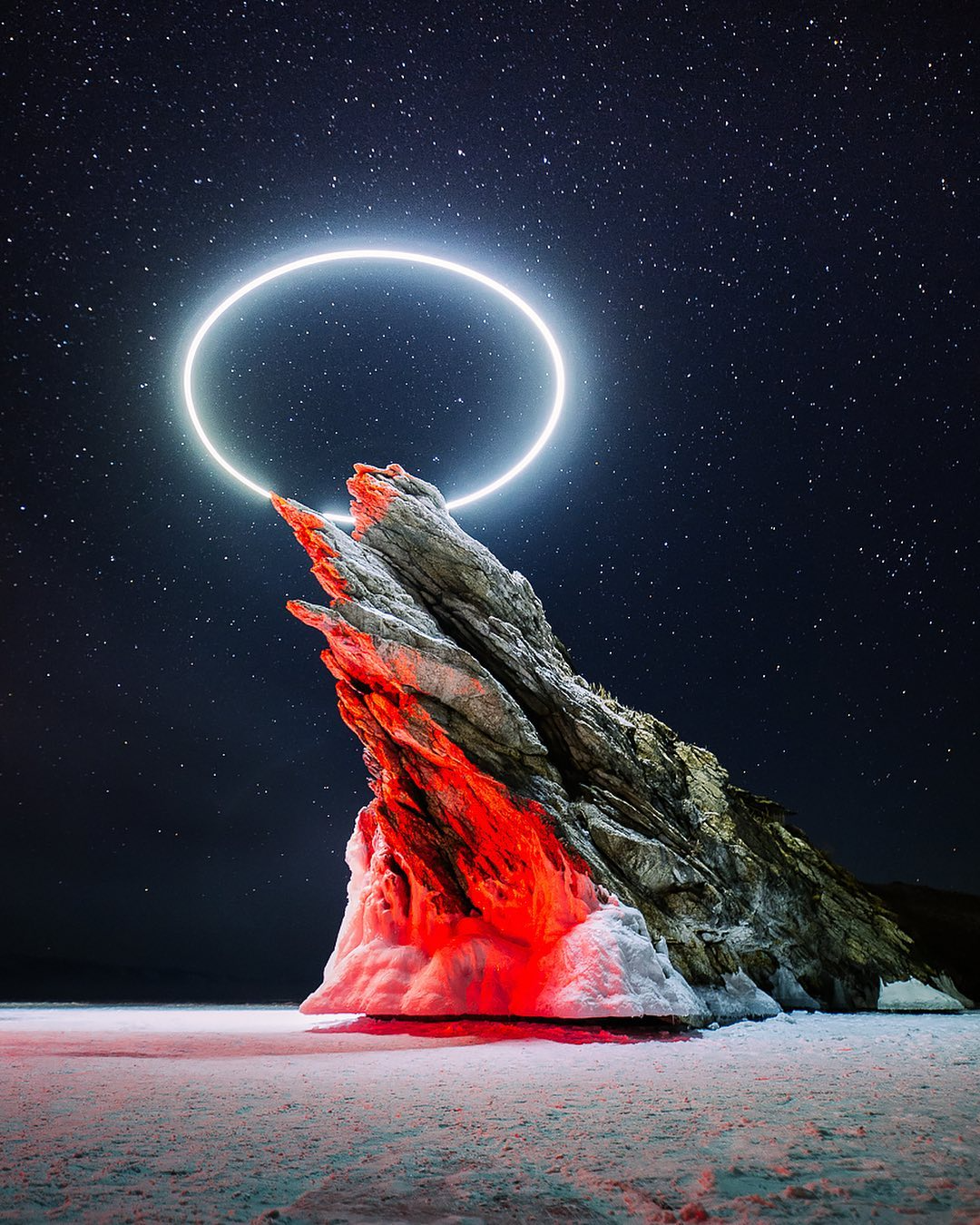 Where was this image taken?

Frozen Lake Baikal, Russia. To be more precise, it's near the island of Ogoy.

How did you come up with the idea? Is this an idea you have been wanting to try? Have you taken photos at this location before?

I have been to Lake Baikal several times, but always in the summer. I have seen this cape many times in winter photos before and I thought it might be an interesting idea to draw a circle of light over it so that a cape's sharp point pierces it. And then, I had a red lantern that was in the trunk of my car which became a nice addition.

How were you able to create such a perfect circle with your drone?

Complete absence of wind and Intelligent Flight Mode on my drone!

Let's talk lighting! How did you use Lume Cubes and other lights to light the scene?

I used two Lume Cubes with lighting mounts for my drone to create the circle. Additionally, I had a cheap lantern to help light up the fore ground in red.

You take incredible landscape photos in really beautiful place. What are the challenges of shooting landscape photography? How do you find your next place to shoot?

I was born and grew up around nature (no, I’m not Mawgli haha), so shooting landscapes for me it’s something usual. But, at the same time there is always something new: you never get the same light like you had before, also sky and mood can vary.

Do you travel a lot to shoot? What has been your favorite location to take photos at?

No, not much. Especially last year due to pandemic. I love Ergaki National Park. It's somewhat similar to Yosemite National Park in the United States. I like not only to shoot there, but also just to be there. This is the place where you can charge your internal battery for a long time.

Did the climate of this shot cause any issues when flying your drone?

It was about -30 degrees celcius outside, so yes. I checked the time when I took the first and the last photo of this series and the only 11 minutes between them. My iPhone, due to extreme cold, died even earlier so I had to land the drone in manual mode.

Can you share your camera and camera settings for this shot? And please tell us more about what drone you used.

I prefer to combine photography with sport. With mountaineering in particular. So, the most rewarding experience was on Mount Elbrus in Russia where I was met with an incredible twilight right before sunrise about five years ago. It was so amazing I couldn't believe my eyes. You can find a picture in my Instagram.

I mostly use prime lenses. For the shoot, besides my camera and drone, I will take 3-4 lenses. Carrying all my gear is always challenging, but it is worth it.

What is your post-process when it comes to editing? Do you edit your photos? Do you have a favorite way of editing them?

I don’t edit much. Mostly in Adobe Lightroom only. I believe that if a photo needs a lot of editing to get a beautiful picture - it's a bad photo. But anyway, many people don’t even understand that my night landscape pictures with Lume Cubes are not photoshopped – they don’t understand how they were made. That is a flying magic lantern! Haha

Did this photo turn out to how you initially envisioned it?

Not really. First of all, there was too much snow, but I was hoping for clear ice. Secondly, I planned to highlight the starry sky more than it turned out. To do this, I had to reduce the power of the Lume Cube. The next night we came to this point again, but it was very windy and overcast. This year I thought about going to Lake Baikal again to reshoot the this photo, but eventually I preferred mountaineering in the far north.