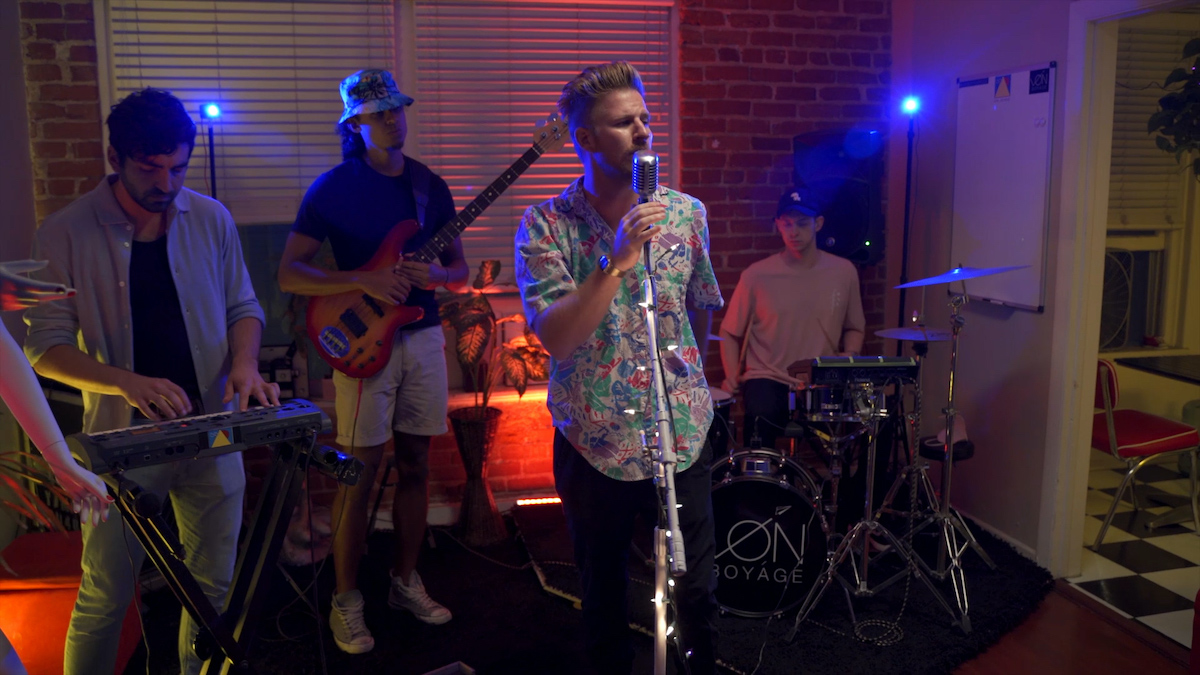 What was the inspiration behind the set for the live performance video?

So, we recently finished and released the single “Summer” which was a collaborative track we did with a band called “Ed.1t”. We all agreed we wanted something visual to put out to the world to accompany the song and entertain people during these isolated times. Ideally, a live show would have been a great way to showcase the song. However, as you know, music venues are closed until further notice. So we had to get creative and come up with a way to perform the song and deliver it to viewers. Stevie, my drummer, and I shot another live performance at my place before this one so we wanted to do something similar and change the lighting a bit to fit the mood of the song. I literally use my Lume Cubes for anything pertaining to lighting so it was a no brainer when it came time to setting the scene for the video, they would be used! As you can see from the video, my living room is setup as a stage so that Stevie and I can practice performing live and also host intimate listening parties (Pre-Covid).

I am a photographer / videographer myself and have a close knit group of friends who all enjoy creating as well. So I reached out to my buddy, Dustin Bloodgood, to see if he was interesting in shooting and editing the piece for us. We had one pre-shoot meeting to go over the room and what color combos we wanted the lighting / mood to be and then set a date. The night before the shoot Dustin came over and we staged out all the lighting which included 4 Lume Cubes and some other LED light strips. I have a bunch of stands so we positioned two of them behind the scene to shine forward on our backs as we played. The other two cubes we used to shine up the walls and kind of paint the scene a bit more. I have a couple different sets of the Lume Cube gel packs so picking a color was as easy as testing out a few and seeing how they felt in the space. There ended up not being enough room for all 5 of us to fit in the scene so we opted to put the guitarist on the couch. We decided to use my projector to create an interesting 70’s pattern projection which shined on him and to the screen behind him.

How many Lume Cubes were used? What were the settings? What colors?

I used four Lume Cube lights in addition to other LED lights that we had on hand. We kept all the cubes at or around full power and plugged in. We used blue, red, and yellow colored gels. We also used the two Lume Cube hot shoe mounts in order to attach the cubes to the stands and have directional mobility. 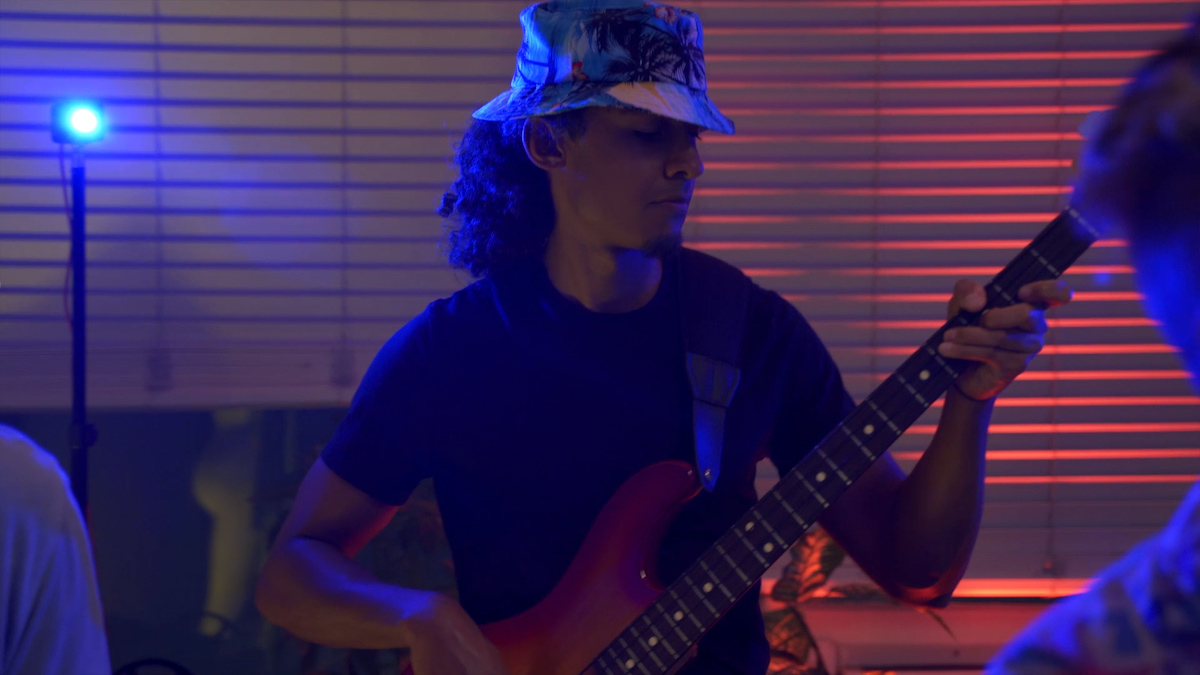 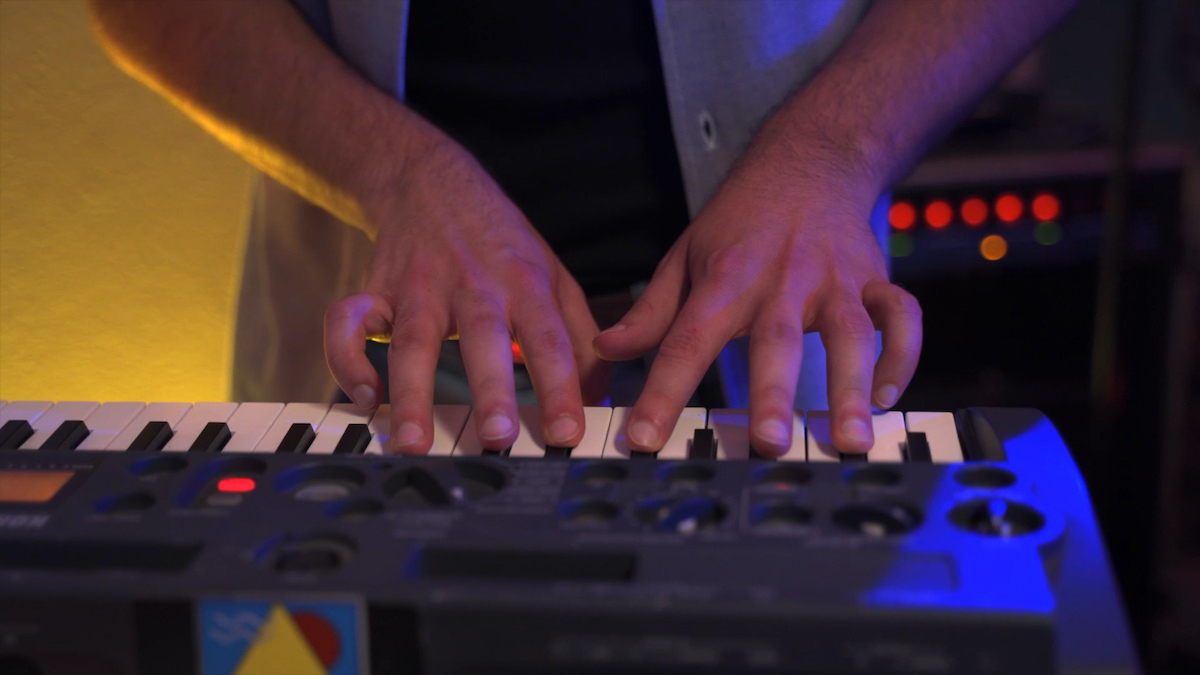 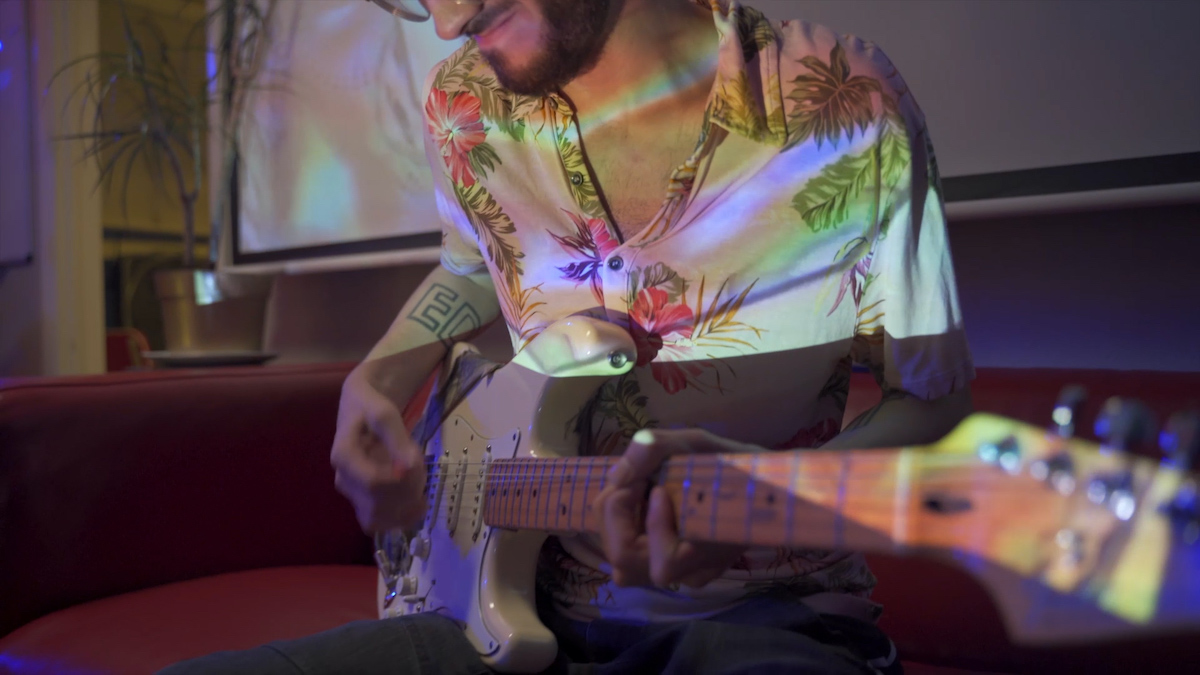 Importance of lighting in a music video for artists?

Lighting in general, for any type of photography / videography, is the most important part. If you do not light your scene properly it's game over before you even shoot. In our first performance video that we put out for our single “Dreaming”, we did not have the lighting quite right, which resulted in some minor pixilation issues upon posting. Im glad we beefed it up this time around and got the scene properly exposed for camera.

Did the music video come out the way you imagined it?

This was the very first time I got draft 1 back of any video and was relieved to see something I loved. The scene looked amazing and it only took a couple minor tweaks to get the video edited and finalized. We all were very pleased with how it came out and wouldn’t have lit or filmed it any other way! 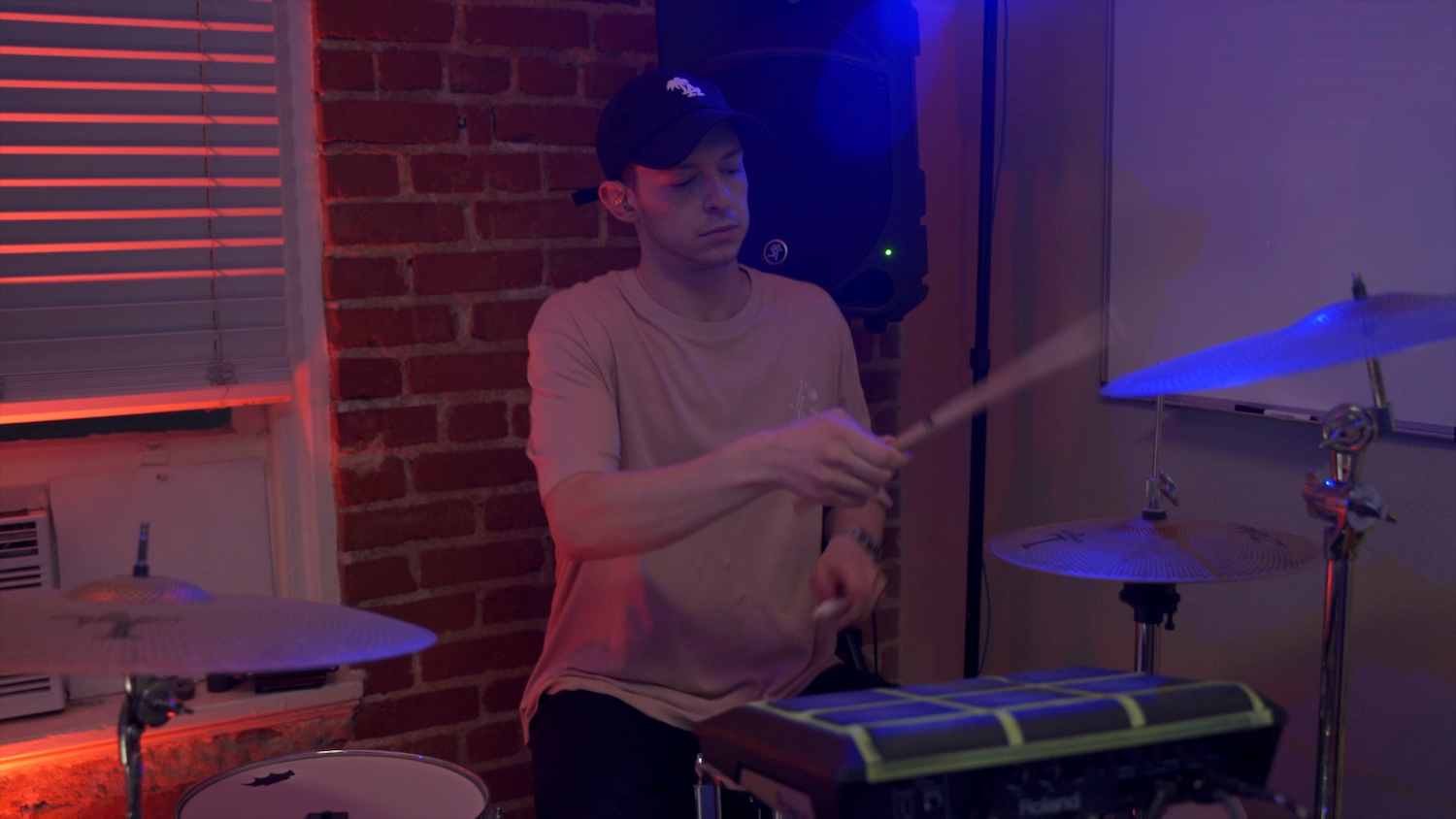 Any crazy plans for using Lume Cubes in your next video?

Well, it’s funny you should ask. We actually shot a music video in the beginning of this year for our next single to be released “Laissez Faire” and Lume Cubes were a major lighting source in that production. We had planned to release both the song and music video in August but we decided to hold off until 2020 ends. So we will be releasing that early 2021. We are actually in the process of planning another music video right now and I can assure you Lume Cubes will be used!

Favorite music video currently and why?

I’m struggling to come up with my favorite music video at the moment. Honestly, I think they are all great. Visual content in accompaniment of music is such a no brainer for me. It allows the artists to tell a story on top of the story of the song. It’s like doubling down on a release and having two forms of media to distribute to the world. Music videos are an art within themselves and I absolutely love the process of production involved. For live shows, we plan on always having a projector shining behind us in order to create a mood and give people something to zone out to. 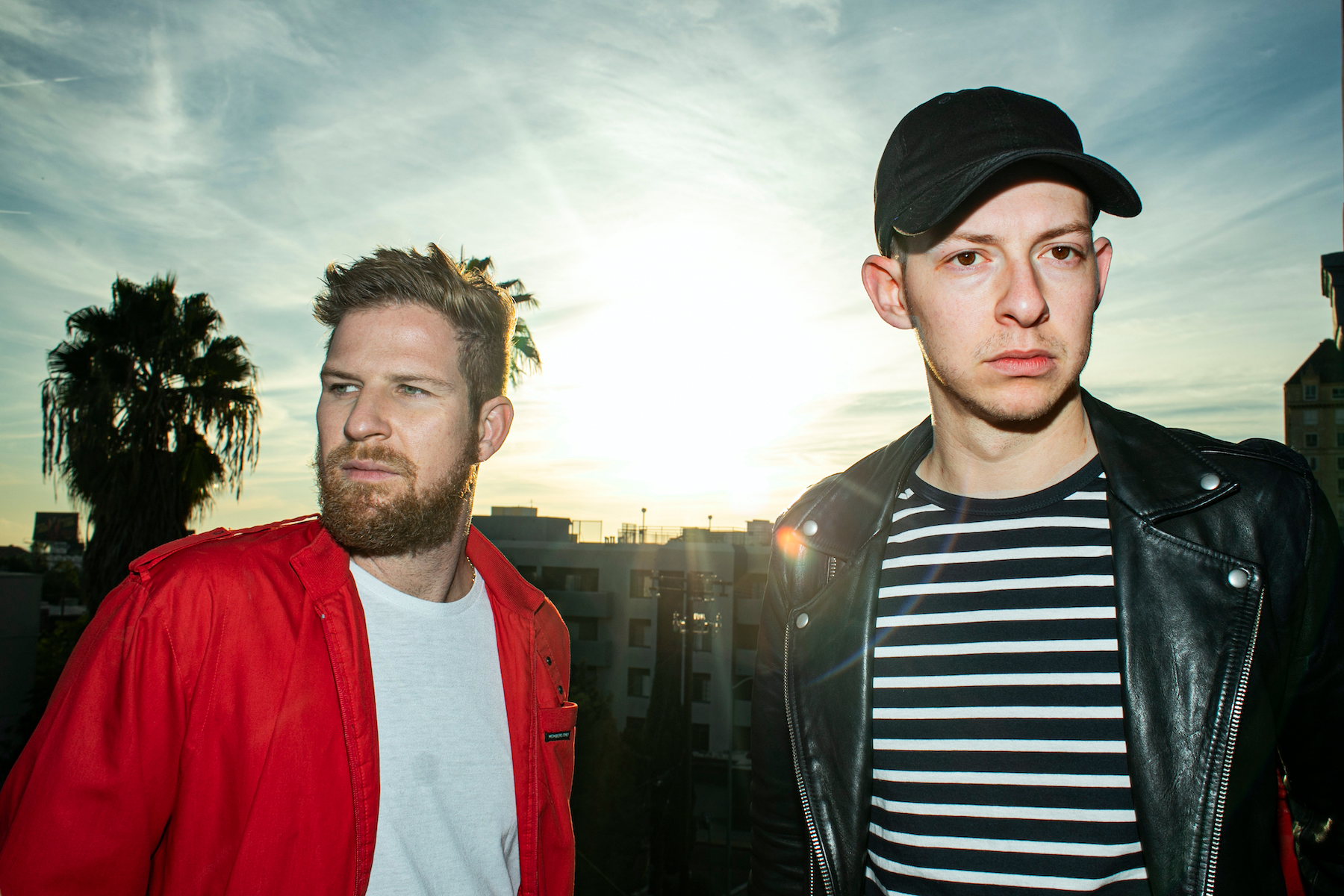 A music duo out of Los Angeles, CA. The band consists of front man and founder, Christopher Hocker and drummer, Stevie Noah. The name “Von Boyáge” was developed by Christopher and translates to mean “a boy’s journey through life”. Spelled the way it is for two reasons, one of which being SEO and the other because Christopher seems to do a lot of things backwards.

The music is a combination of synth, vocals, and nostalgic beats from the 1980’s. This is what makes Von Boyáge’s sound original, yet familiar to the listeners. Von Boyáge has used music's progressive movement to complete a full sonic spectrum of old and new styles.. The music challenges its' listeners to look into the past while discovering their own direction for the future.